Buy the iPad version on the iTunes App Store

Buy the iPhone version on the iTunes App Store

Buy the Android version on the Google Play Store

Free Android version (with ads) on the Google Play Store

Trapezoid is an amazing Hammered Dulcimer app for iOS and Android.

Written by an experienced Hammered Dulcimer player, this virtual dulcimer sounds and plays like the real thing!

The iPhone/Android versions have a slightly smaller range.

The iOS versions may be played via MIDI from a MIDI keyboard connected to a hardware MIDI interface, or from other MIDI controller apps.

To play, just touch the strings on either side of the left (Treble) bridge or the left side of the right (Bass) bridge just like the real instrument.

To get repeated note "drag roll" effects, drag quickly horizontally across the strings. The sensitivity of the drag effect may be set in the control panel.

Touch the "?" on the upper left corner to show the note names for the strings.

On the iPad version, touch the "i" on the upper left corner to show the settings screen where you may:

The new "StrikeZones" instrument style shows you exactly where to touch on the screen for each note. The zones light up when touched. It is an excellent tool for understanding or teaching the layout of the instrument.

- Show or hide the hammer touches

- Enable or disable the drag roll feature and set the roll sensitivity for how far you need to drag to get the roll effect.

- Learn more about ThumbJam or visit the AppCordions website

Touch the "i" to bring up the settings screen where you can enable or disable the drag roll feature and set the roll sensitivity for how far you need to drag to get the roll effect.

On the smaller screen phones the strings are pretty close together. If you are having trouble hitting the notes you want, show the note names by touching the "?" and then when playing, touch directly on the note names for best playing accuracy.

Touch the "Shhh" button ("!" on iPhone version) on the upper right corner to quiet all the strings.

The iPhone/Android versions are best experienced on the larger phones such as the iPhone 6/7/8/X and 6/7/8 Plus or larger Android Samsung Galaxy devices.

Playing via MIDI (iOS only)

The iOS apps may be played from a MIDI keyboard connected to a hardware MIDI interface or other MIDI controller apps.

When playing via MIDI, the app is velocity sensitive based on the velocity sent with the Note-On events.

MIDI range is fully chromatic from A2 through D6.

When playing via MIDI, the volume is based on the Treble bridge notes volume.

To truly experience the full stereo spread of the instrument, plug in a set of headphones or amplified speakers.

Samples of Wes Chappell's fantastic Hammered Dulcimer provided by Jesse Chappell at ThumbJam.com. The instrument was built by James Jones, from Bedford, VA.

I have played and taught the Hammered Dulcimer for over 20 years. This app sounds and plays as close to the real instrument as I'm capable of doing on a touch screen.

Trapezoid for iPad - Demonstration of the "StrikeZones" instrument option

Using Styluses from the 99-Cent Only Store as Hammers

Sam Rizzetta, one of the world's masters in the design and building of hammered dulcimers,
has come up with an innovative design for conductive hammers to use with my apps. 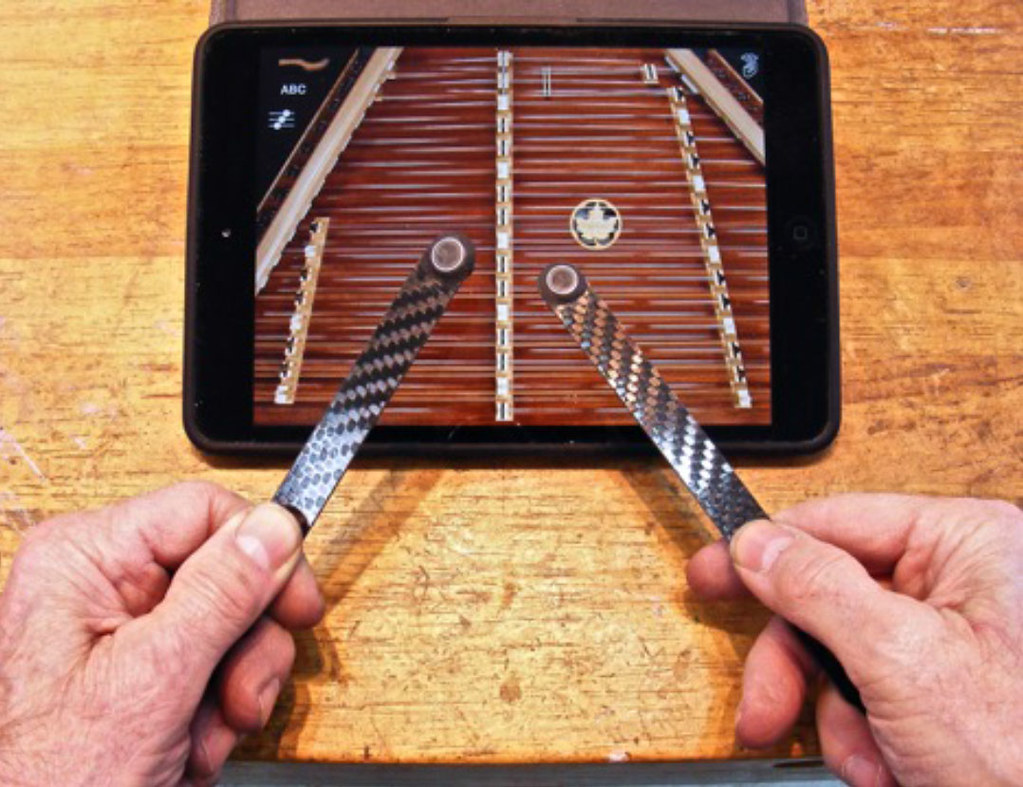 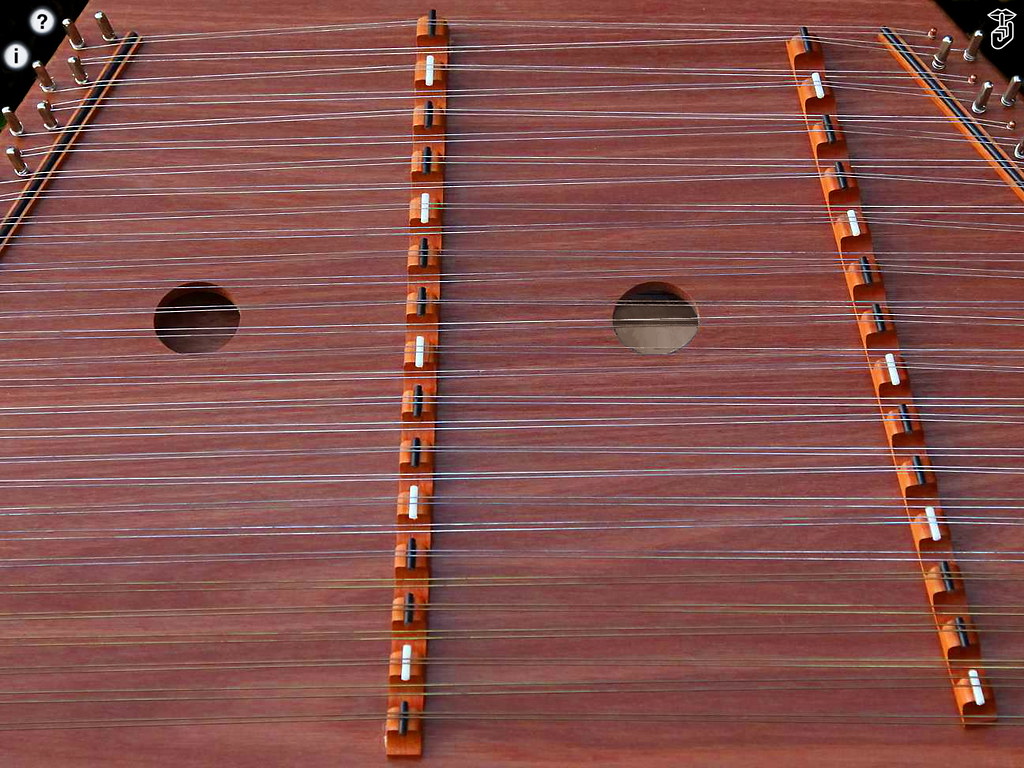 Touch the "i" to Show the Controls 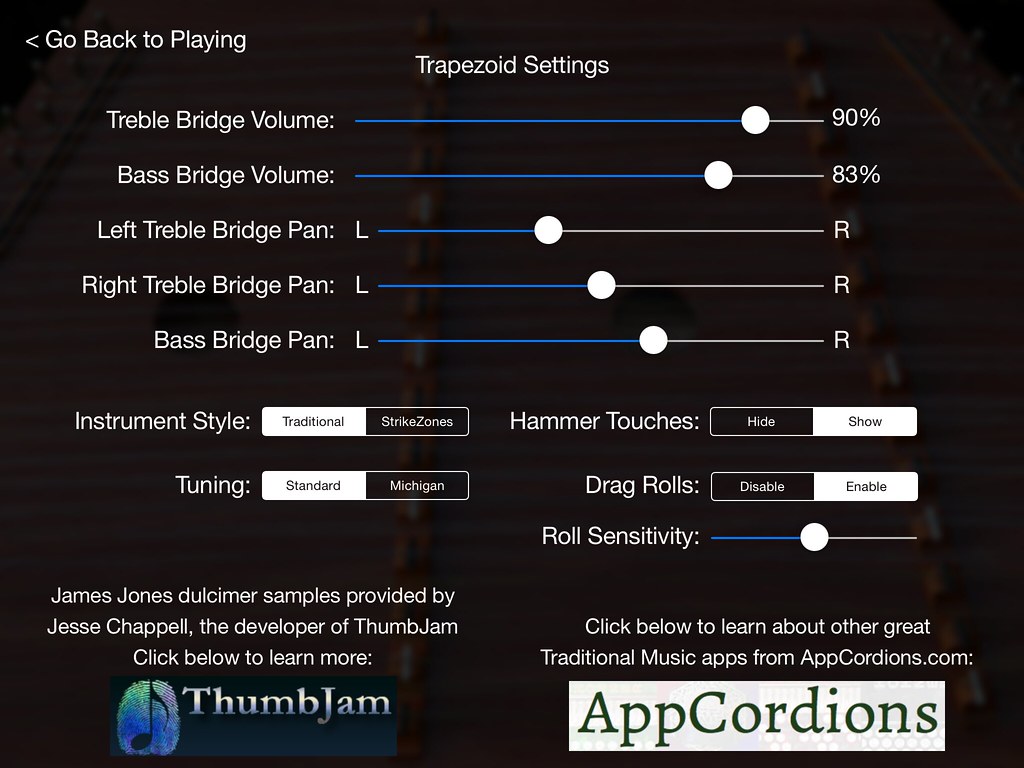 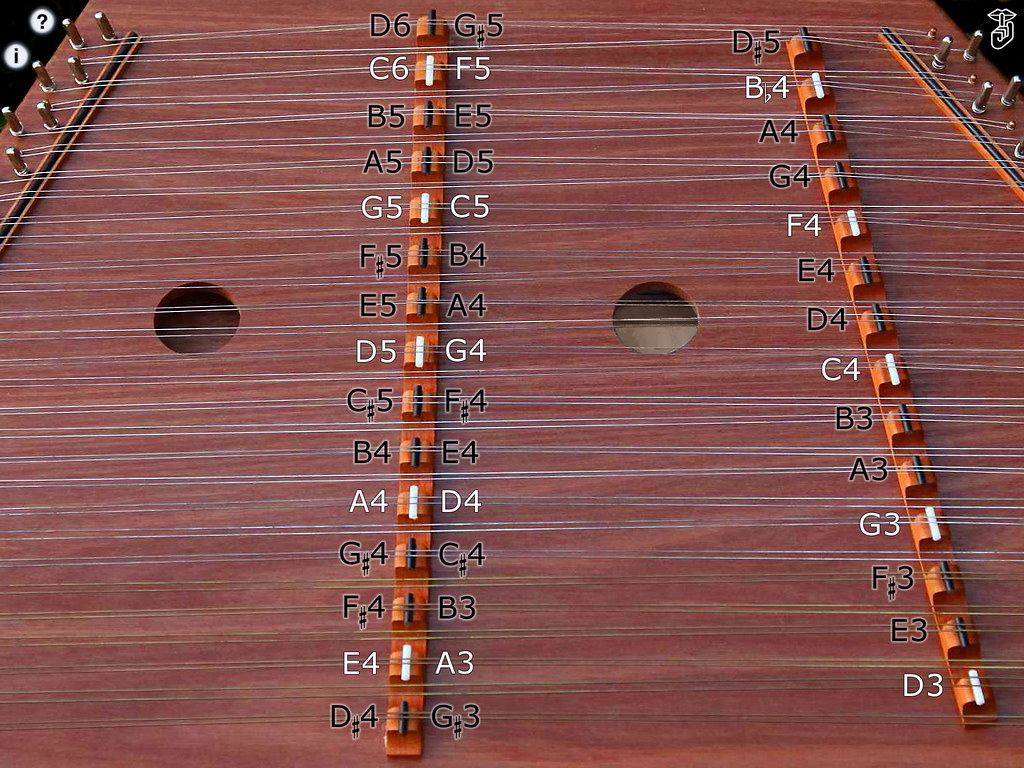 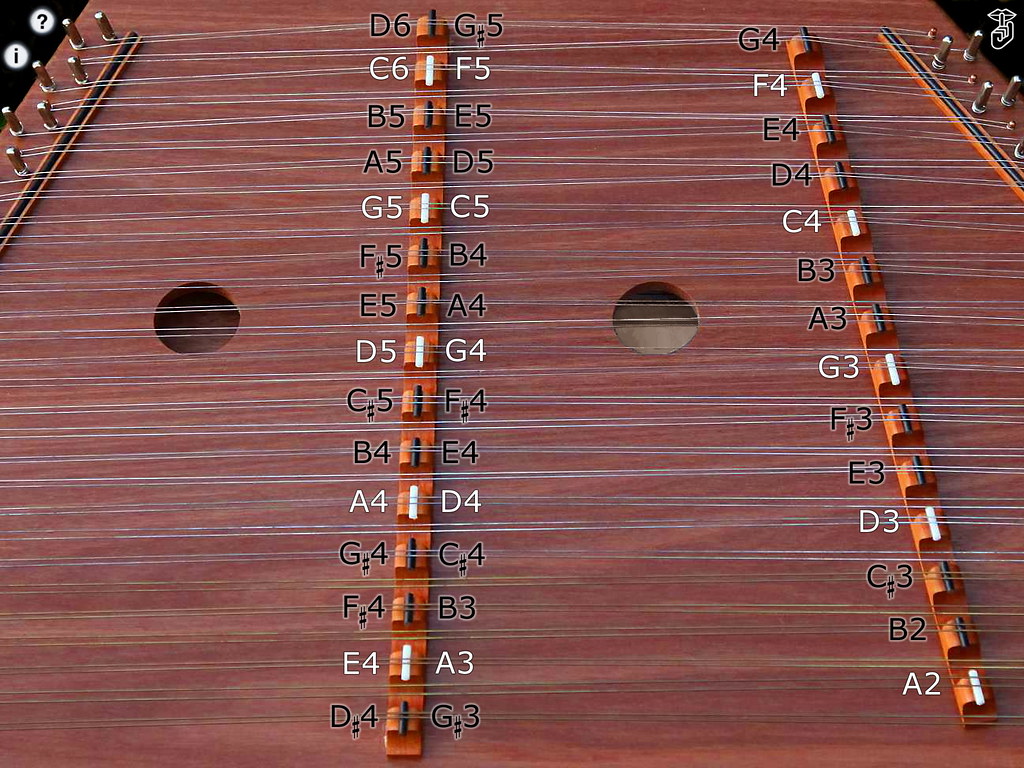 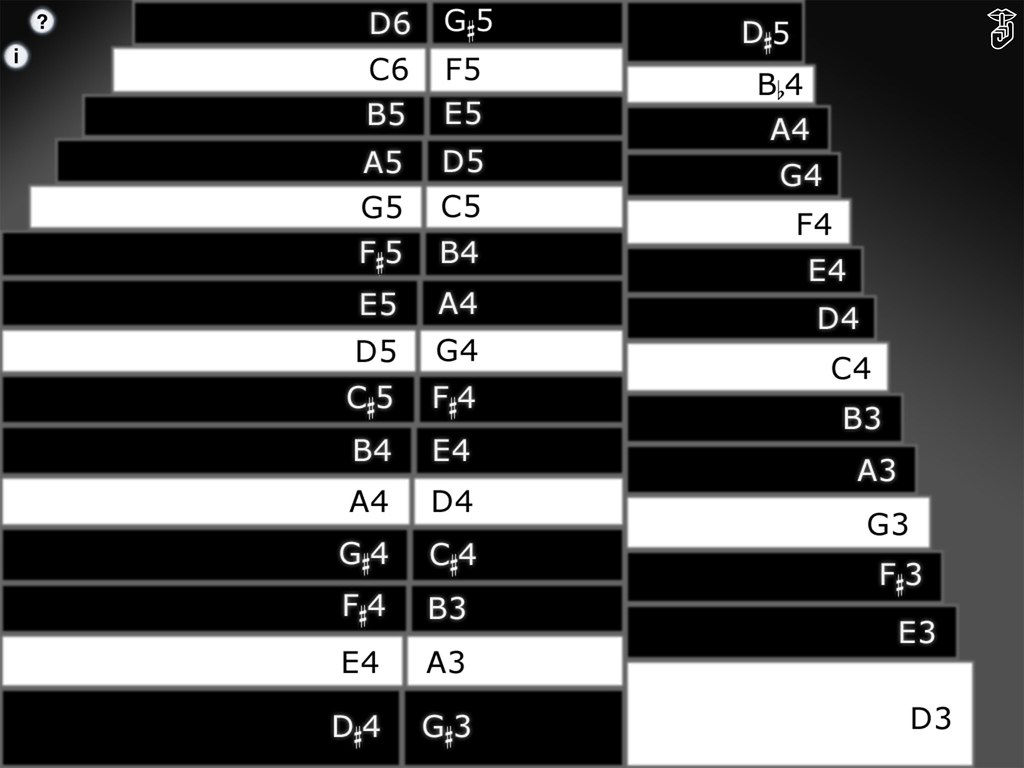 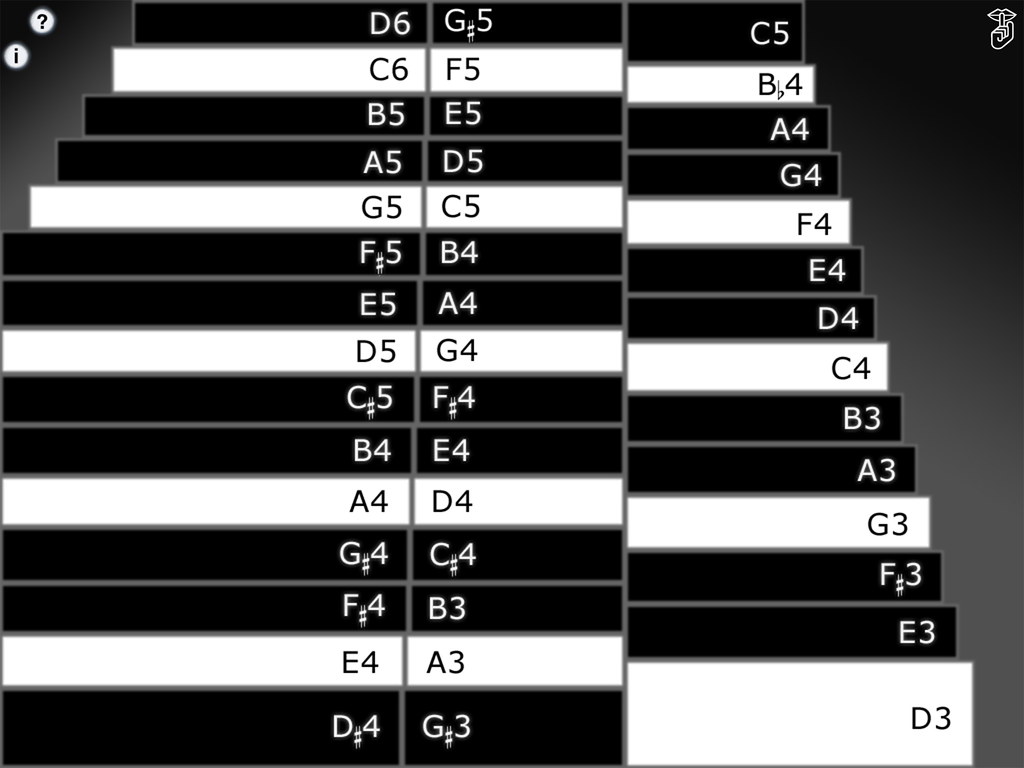 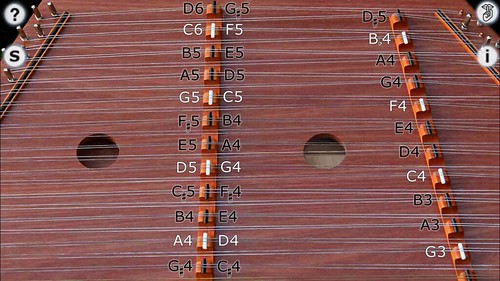 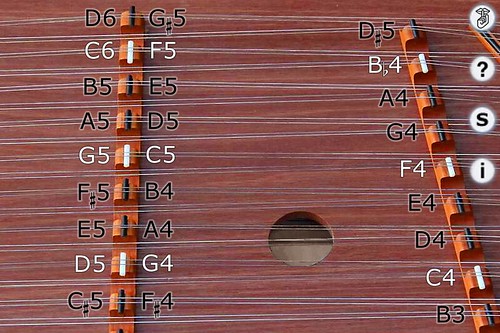 "I downloaded this and like it. I'd tried a similar app a couple of years ago, and the delay between touching the "string" and the sounding of the note was just enough too slow to make playing impossible. Trapezoid strings ring when struck, er, touched. It's no substitute for the real HD, but it could be good for picking out melodies, working out chords, and just playing around when the real thing is not handy."

Here are some great websites where you can find free instruction and more information on learning to play the hammered dulcimer:

"Playing the Hammered Dulcimer in the Irish Tradition" by Karen Ashbrook